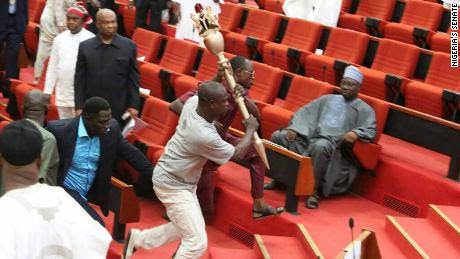 Deputy President of the Nigerian Senate, Senator Ovie Omo-Agege at a valedictory session on Wednesday revealed that his relationship with late Senator Benjamin Uwajumogu was very cordial.

Benjamin Uwajumogu who represented Imo North Senatorial district on the platform of the ruling All Progressives Congress (APC) died on 18th December, 2019.

As Senators took turn to speak on their individual perspective of the later lawmaker, DSP noted that the 8th Senate believed and suspected “himself and late Benjamin Uwajumogu” that they invaded the Red Chambers on the 18th April, 2018 to cart away the mace, Daily Post reports.

According to him, other colleagues loyal to Dr. Bukola Saraki-led Senate labelled them rebels.

He explained how both of them had the same political trajectory, saying that they came to the Senate at the same year having navigated through political stormy waters of the South East and West.

He lamented that late Uwajumogu could live for 52 years, saying that God did not allow him to live longer.

“Though, Benjamin Uwajumogu was gifted in many ways, the only gift God denied him was long life.

“We both project the same political trajectory, having come to the Senate the same year through minority parties.

“We both wriggled through so much litigation after elections from the election Tribunal to the Court of Appeal and still won.

“You all recall what happened in the 8th Senate, you call us rebels if you like. I and Ben worked closely. When I was to be suspended, it was contemplated that Benjamin Uwajumogu should also be suspended.

“On the other hand, they said, I alone should be suspended and I was suspended which I went to Court to quash it,” Omo-Agege said.