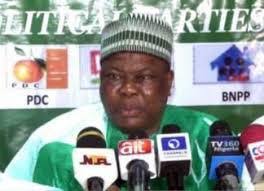 Son of Labour Party National Chairman, Umar has given details on why his father, Abdukadir suddenly died.

Acccording to him, Abdulsalam slumped on his bed and died instantly in his presence in the early hours of Tuesday.

In an interview with The Sun, he said that his father was hale and healthy before his death.

He said: “On Monday, we chatted and I even went to the market to buy some things for him. He was just full of life. This morning (Tuesday) he tried reaching me, but I was asleep. He sent for me, but before getting close to him, I saw him slump on the bed and die. He was not sick the previous night, even though he had visited his doctor last week. As I speak with you, we are already taking his remains to Minna for burial.

“We will surely miss him. He was an honest man and my role model. He taught me how to be independent and survive on my own. He taught me to be patient with people and how to go along with people. Until his death, he never kept malice with anybody.

“He never raised his voice on anybody. He carried everybody along irrespective of who was involved. Even as a Muslim, most of his friends and associates were Christians and they can testify to how liberal and free he was with people. We will miss him because he had a very cordial relationship with every member of his family. I called the granddaughter; she has not stopped crying,” Umar said.