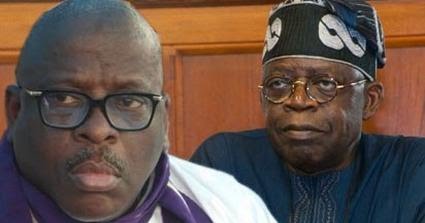 The National Leader of the All Progressives Congress, Asiwaju Bola Tinubu, has reacted to the death of Senator Buruji Kashamu, saying that death is inevitable for every mortal.

This was contained a statement personally signed by Tinubu on Sunday.

Kashamu died of COVID-19 complications on Saturday and was buried at his home in Ijebu-Igbo on Sunday.

Former Ekiti State Governor, Ayodele Fayose, had faulted Obasanjo, reminding him that he will “still die”.

Tinubu said Kashamu worked assiduously to advance the political and economic fortunes of his state – Ogun.

He said, “We must all continue to embrace all the protective protocols recommended by the government and health authorities, even as we gradually begin the reopening of our economy and return to a new normal in our lifestyles.

“Again, Kashamu’s sudden death has demonstrated the transience of human life and rekindles the fact that death is inevitable for every mortal. As such, it behoves on us to be kind to the dead.

“I admire his political doggedness and sagacity, and his steadfastness in pursuing whatever he believes in, though we were never in the same political party.

“His passing has lengthened the grotesque list of important personalities that have been lost to the COVID-19 pandemic. It is also a sad reminder that the deadly virus remains very much with us