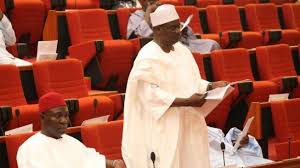 The former majority Leader of the 8th Senate , Ali Ndume, has resumed his duties as a Legislator after seven months of suspension.

When he showed up at the red chamber on Wednesday, Ndume moved a motion on privilege and paid tribute to the late Isiaka Adeleke, who represented Osun west until his demise.

“The distinguished Senator Isiaka Adeleke who was sitting right behind me, I used to call him my landlord,” Ndume said.

“I did not have the opportunity to pay my tribute and I want to appeal to this Senate to stand for a minute silence and pray for the repose of his soul.”

It did not stop here since in the House of Representatives, two to three people died and one lost his seat. It could have been me because I am not better than any of them. So, I thank God.”

“I am humbled by the sympathy and empathy that Nigerians have shown me within this period.

“I am a son of nobody who became somebody without knowing anybody. I thank God.”

“After this address, I am heading straight to the airport to perform the lesser Hajj and Thank God.”

Previous: PDP National Chairmanship aspirants sign peace accord
Next: Ndume: If anybody thinks my action is personal, i leave it to God, the ultimate judge