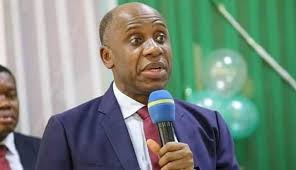 I am more qualified than Tinubu, Osinbajo and others – Amaechi

Former Governor of Rivers State, and the immediate Past Minister of Transportation Rotimi Amaechi has claimed he is the most qualified aspirant to fly the flag of the All Progressives Congress (APC) in the 2023 elections.

He called on delegates not to be deceived by the money aspirants give them but vote for competence and track records, which he represent.

He said: “Your Excellency and delegates, I just turned 57. I may not not be the youngest candidate but I am not the oldest candidate.

“I am the most experienced of all the candidates. I was elected Speaker of the Rivers State House of Assembly and I served for two terms. While serving as a speaker, I was the Chairman of the State Speakers of Nigeria twice. After that , I became the Governor of Rivers State and served for two terms. I was also elected Chairman of Governors forum twice.

“Your Excellency, by your grace and the Grace of God, you appointed the Ministry for Transportation; again, I served twice. Your Excellency, you appointed me the Director General of your campaign, and again I served twice. I am the first Nigeria to have in conjunction with others led a campaign that removed the siting government to bring in the opposition. I worked so hard with sleepless nights to bring our President.

“All those who have come here to speak should have told Nigerians what they have done in their states. Judge me by my work. When I became the Minister of the Federal Republic of Nigeria, the railway was moribund. Today, there are railways across the country.

“Don’t vote for me if I have not performed, but I have performed. I have decided with my wife and children, friends and relations, that there is a need to move forward – to come forward to serve the country for Nigerians to hire me, and to fire me if I do not deliver.”