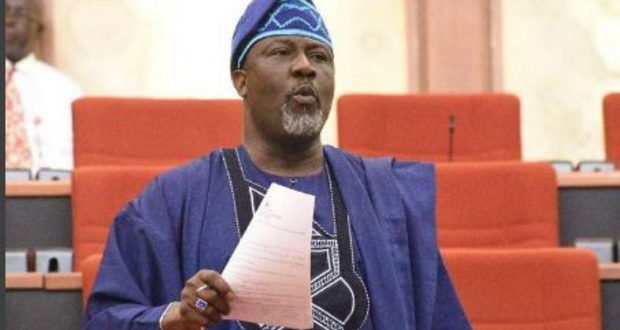 The Senator representing Kogi West in a statement signed by his Aide, Gideon Ayodele on April 25, said having surrendered himself to the Police, he did not deserve to be forcibly taken to Lokoja to stand trial for crimes which include murder and armed robbery.

Melaye has said that he jumped down from a moving Police vehicle, which resulted in his hospitalisation on Tuesday to prevent being taken to Lokoja, Kogi State by the law enforcement Agency.

The statement said, “Earlier in the morning, Dino Melaye as a law-abiding citizen voluntarily submitted himself to the operatives of the Special Anti-Robbery Squad (SARS) who had laid siege to his private residence since around 3.35pm of Monday, April 23, 2018.

“He, along with his lawyers and personal Aides, was driven in his private car to the SARS office in Guzape District of Abuja, sandwiched among the numerous Police vehicles earlier deployed to his house.

“But shortly after Melaye entered the Police custody in Abuja, officers dragged him in a vehicle and headed towards Lokoja, the Kogi state capital which also falls under his Kogi West Senatorial District.

“Melaye feared that his life would be in danger if taken to Lokoja, amongst other alleged sinister motives of both the Police and the state government there.”

The statement also pointed out that another reason the Senator refused to go to Lokoja was that he had previously secured a court relief for the case to be moved to Abuja.

“The public will vividly recall that this same case involving Dino Melaye had already been transferred to Abuja by the Chief Justice of the Federal High Court after Melaye expressed worry about his safety in Lokoja. Now, the question is why will they want to forcefully take him to Lokoja?

“The Senator believes they are doing the Kogi Governor’s bidding in order to assassinate him. For the avoidance of doubt, he had never evaded Police invitation before now because there was none extended to him in the first place.

“Rather, what the Police FPRO, Mr. Jimoh Moshood, had been doing was to summon the Senator through media briefings, a practice which is unconventional,” he said.

The Police had in a statement said Melaye escaped while being taken for arraignment in Federal High Court Lokoja from Abuja when hoodlums and miscreants in two Toyota Hilux Vehicles blocked the vehicle conveying him around Area 1 area of Abuja.

The Police said in the process, the Senator jumped out of the Police vehicle through the window and was rescued from the Policemen by hoodlums and miscreants to an unknown destination.

However, Police said a re-enforced team of officers later trailed Melaye to Zankli Hospital, Abuja where he was re-arrested.

The Senator has been moved to the National Hospital Wednesday morning on the instruction of the Police.