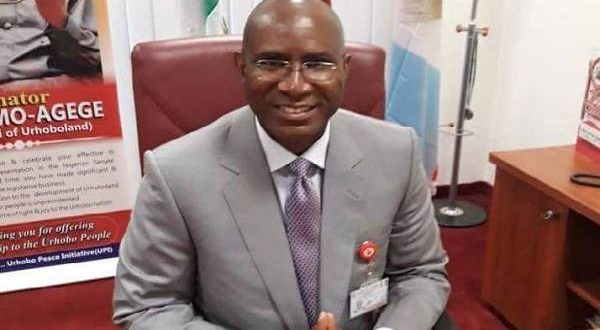 “I did not order EFCC to probe Minister of Niger Delta Affairs,” Omo-Agege denies

The Deputy President of the Senate, Sen. Ovie Omo-Agege, said on Sunday that he did not order the Economic and Financial Crimes Commission (EFCC), to probe the Minister of Niger Delta Affairs.

In a letter, Omo-Agege was said to have, requested the Chairman of the anti-graft agency, Mr Ibrahim Magu, to investigate the Minister did not come from him.

Omo-Agege made the clarification in a statement by his Special Adviser on Media and Publicity, Mr Yomi Odunuga, in Abuja on Sunday.

Describing the document as fake, the Deputy President of the Senate insisted that he never instructed the Clerk or any other person to contact the EFCC to investigate any individual.

“The attention of the Office of Deputy President of the Senate has been drawn to a letter dated May 7.

”The letter was said to have purportedly been written by the Clerk of the Senate acting on behalf of the Office of Deputy President of the Senate requesting Chairman of EFCC to investigate and monitor the Minister of Niger Delta Affairs and one other.

“This Office hereby states that the said letter is false, fake, malicious, mischievous and vexatious.

“This office never instructed the Clerk of the Senate, or in fact any person, to write to or contact the EFCC in relation to any person.

“In the light of the foregoing, we wish to urge the public to disregard the fake letter, same being the handiwork of a person or persons with criminal intents,” the statement said.

Previous: “Come for public debate if you have moral record,” Edo dep gov dares Oshiomhole
Next: Why there is delay in prosecuting Ajimobi, others- Gov Makinde