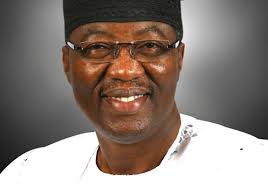 Ex-Governor of Ogun State Governor, Otunba Gbenga Daniel, has said that he didn’t steal any money or land as a Governor.

He admitted that he is not a saint, he did everything right as the Ogun State Governor.

It will be recalled that he was the Governor of Ogun from 2003 to 2011 when he was succeeded by Senator Ibikunle Amosun.

Speaking to journalists during a Special Thanksgiving Service held at the Abraham Tabernacle in Sagamu on Sunday, he recounted how he was tried for 11 years despite serving Ogun State for eight years.

.He noted: “What I was sure of is that, I am not a saint, but I did everything right to the best of my knowledge. I don’t know how anyone will say I stole the land on which this (Abraham Tabernacle) church was built. I don’t even know who the complainant is. The land was paid for, the church is not for profit-making. We donated the church back to the Baptist convention.

“Another one is The Church of the Lord in Ogere, where we gave them a land to build a university. How do we turn things around in the nation if we don’t encourage this kind of thing? What’s my duty as a governor? I’m supposed to look at areas where people need support and help them.

“The perception was that everybody is taking money. Do you take money from the church?

“Those are the things I had to face; and quite honestly, I felt strong, felt God will vindicate me, but there are certain times I got worried because when you see what is happening, you wonder. I think the tragedy is, in whatever we do, we must not see every single person as a thief. Because, there must be consequence for doing bad and appreciation for doing right. But when you have a society where those that do right are being persecuted, there will be no incentive for doing right. That’s my own worry,” he submitted.

He lauded the judiciary for standing by the truth, saying: “Let me end this thanksgiving by saluting the judiciary, I have a strong belief that the judiciary being the last chance of a common man is the only succour that our country continues to have.

“I am praising the judiciary today that, despite the challenges they have, the difficulties they have encountered, (because it is not easy to decide who is wrong or who is right in our country), but for the judiciary to stand and decipher and come to the kind of judgment they gave, I want to dedicate this victory to them. They failed to succumb to pressure.”

In his sermon, the Retired Prelate of the Methodist Church of Nigeria, Dr Sunday Makinde, congratulated Daniel for his triumph over the trial.

Makinde implored Christians to imbibe the spirit of praises and thanksgiving to God at all times.

Previous: Lagos 2023: MURIC kicks against endorsement of Sanwo-Olu’s second term
Next: 2023: I have made myself to defeat APC- Wike