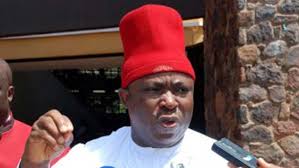 I dumped APGA because of conspiracy against me- Victor Umeh

Chief Victor Umeh, the former National Chairman of the All Progressives Grand Alliance (APGA), has explain why he embraced he Labour Party.

Speaking during a t a press conference held at the Secretariat of the Anambra Council of the Nigeria Union of Journalists (NUJ), Awka, he said that he dumped APGA because of an alleged conspiracy against him by some party members in the state.

“During the last senatorial primary election, which I contested under APGA, it was glaring that some people within the party perfectly wheeled conspiracy to pull me down.

“That was why I decided to leave APGA,” he said.

He further said that he joined LP on the advice of the party’s Presidential Candidate, Mr Peter Obi.

He expressed delight over his movement to LP, saying that the decision had reunited him with Obi.

He recalled how Obi and himself steered the ship of APGA to victory and opined that a similar fate was about to repeat itself in LP.

“Nigerians from all shades of opinion want Peter Obi as president in 2023 and what is happening in LP is divine.

“What is driving him are statements he makes on the management of the resources of the country.

“These truly represent his conduct on the ways public resources should be managed,” Umeh said.

Previous: Shina Peller joins Accord Party after dumping APC
Next: 2023 Presidency: I am solidly behind Tinubu- Buhari declares