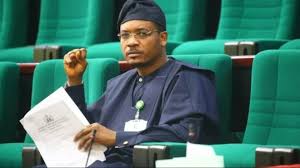 I have no plan of dumping APC- Shina Peller

A federal lawmaker Hon. Shina Peller, has said that he has no plan to leave the All Progressives Congress (APC).

Peller, a member of the House of Representatives is currently representing Iseyin/Itesiwaju/Kajola/Iwajowa Federal Constituency in Oyo State

The lawmaker, an indigene of Iseyin in the Oke-Ogun geo-political zone, made this revelation on Sunday.

It will be recalled that the lawmaker was one of the aspirants that declared their intentions to represent Oyo North Senatorial District on the platform of APC, but could not secure ticket.

In his reaction, he said that he had no plan to dump APC.

In a statement signed by his press secretary, Kola Popoola, he explained that the rumour of his defection from APC to another political party is still a speculation.

Peller said that such rumours are still speculations, adding that he honouring  one of the politicians in Ibadan does not mean that he had joined NNPP.

Peller said, “My attention has been drawn to an unfounded report going viral that I have defected from the All Progressives Congress (APC) to New Nigeria People’s Party (NNPP).

“Also, while some speculate that I am now a member of the Peoples Democratic Party, some conclude I am now in Accord Party. This is nothing but a rumour, and should be regarded as one by all as I still remain a member of the APC until I announce otherwise via my verified social media handles.

“That I honoured Alhaji Adebisi Olopoeyan’s invitation to his house doesn’t mean I have defected to NNPP. Alhaji Olopoeyan is a family friend, and the fact that we belong to different political parties doesn’t mean I should start playing politics of bitterness with him. I am not that kind of a person and won’t turn to one for political reason.

“That I commended Governor Makinde on a project that is beneficial to my constituents shouldn’t make one conclude that I am a now a PDP member. Also, Engr. Seyi Makinde is not a governor to PDP members only, but a governor to everyone in Oyo State including myself. I haven’t defected from APC to any political party, and even if I am going to do so, that would be for the people of Oke Ogun in Oyo State to decid

Previous: 2023: No presidential aspirant has been disqualified by APC- Adamu
Next: Oyo 2023: Makinde’s deputy, Olaniyan dumps PDP for APC