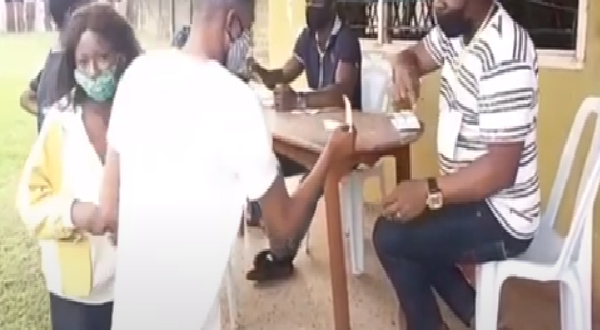 “I have not authorized APC primary in Edo, it is illegal,” Giadom writes INEC

Recalll that Giadom, in controversial manner recently declared himself as the chairman of the All Progressives Congress (APC),

The APC governorship primary began on Monday morning with voting currently taking place across the wards in Edo state.

In a letter dated June 18 but received by the Independent National Electoral Commission (INEC) on Monday, he urged the commission not to be involved in the primary election, as he did not authorise the process.

He also copied the inspector-general of police (IGP), department of state service (DSS) and the Edo APC.

“Reports reaching me is that some persons have perfected plans to conduct direct gubernatorial primaries for our great party in Edo State next week under the purported chairmanship of His Excellency Governor Hope Uzodinma on Monday, June 22, 2020,” it read.

“Kindly note that as the Acting Chairman of our party, I did not authorize such a committee, neither have I inaugurated one. The earlier announced date for the primaries that is June 22, 2020, has been postponed.

“You are therefore advised not to give any support to any such committee or to monitor any such primaries. A new date for the primaries would be communicated to you soonest. We regret the inconvenience this might cause your commission.”

He added that a copy of the letter would be sent to the relevant law enforcement agencies and Anselm Ojezua, Edo APC chairman, “for their information and necessary actions”.

Giadom had declared himself the APC national chairman following the ruling of the court of appeal which affirmed Adam Oshiomhole’s suspension from the same position.

Although a high court of the federal capital territory (FCT) reaffirmed Giadom’s position, another high court in Rivers state restrained him from parading himself as such.

The party, however, maintained that Abiola Ajimobi, former Oyo governor, is its acting chairman, while Hilliard Eta, vice chairman of the party (south-south), was appointed to stand in for Ajimobi who was “unavoidably absent”.

Meanwhile, earlier on Monday, Worgu Boms was sworn in as the national deputy secretary and will take Giadom’s place in the national working committee (NWC) of the APC.

Previous: Breaking: Ize-Iyamu in early lead as results of Edo APC primary trickle in
Next: JUST IN: Ize-Iyamu emerges winner of Edo APC guber primary, may slug it out with Obaseki