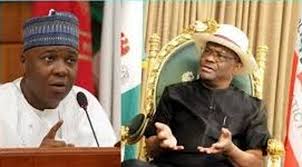 I helped Tambuwal, Saraki to reach the top, it’s their turn to help me- Wike

Wike, shedding light on the politico imbroglio, . said that when they agreed amongst themselves that 2019 was the turn of the North to produce President Muhammadu Buhari’s challenger, the agreement was respected by Southern Political leaders.

He lamented  that now it seems to be the turn of the South, some top politicians from the North, such as Atiku, Saraki, and even Tambuwal,  have all come out against the gentlemen agreement.

“There’s nobody contesting for the presidency from the north that I do not have a relationship with…that I don’t support,” Wike told Channels.

“And there’s no one of them who has not come to me, Wike, and said, ‘with you, I think I’ll have my way…but if you ask some of my friends, the problem I have with friendship is that if we agree on something, let’s keep to it.

“If there’s any reason that it [such agreement] shouldn’t be done, I should be let know. I can tell for example, Saraki is one intelligent young man Nigerians must have to listen to.

“Bukola Saraki, with all due respect, but ask him, I was one of those who made sure he became a Senate President. He was in APC, right? But I stood firm and said ‘look this young man is intelligent’.

“Whether you hate him or you don’t like him, this young man is intelligent and vibrant, why would you not allow such a person to be at the helm of affairs?

“We must do this by age and people were fighting from the North, South West and East. They all fought me asking ‘why are you bringing Tambuwal? He’s somebody that has all it takes to lead.

“I did not support Atiku for my reason that ‘look, Atiku listen, the way your antecedents, your politics, and I don’t think it’s good for them. I supported Tambuwal. But he [Atiku] won.

“I want to challenge anybody, any governor or person in this party who would say they gave Atiku the support I gave him [in 2019]. I can say that in the South South, it was only in my state that APC didn’t get 25 percent.

“I came all out to support him. That time we said it was for the North and nobody came out from the South to say no. I feel bad when they say, ‘this Northerner is following Wike… No one group can win an election without the other.