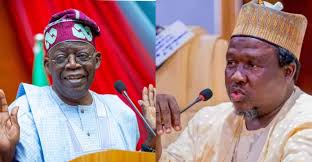 Kabir Masari, the running mate to the presidential candidate of the All Progressives Congress (APC), Bola Tinubu has said that he receives over 500 text messages daily since Tinubu submitted his name as his running mate.

He made this disclosure while having an interview with Voice of America (VOA) Hausa service.

Explaining how he was nominated, Masari said that someone gave him a call around 3 am on that particular day and informed him that he will be the running mate of the APC presidential candidate.

“I was told that I will fill a form and return immediately. The form was brought to me and I filled and returned as directed,” he said.

He however denied any knowledge of being a  placeholder as being speculated.

‘I am a realist and someone who believes in destiny. In the first place, this opportunity, to me, came as a surprise. I never envisaged in my wildest dream that I will be picked. But when it happened, it was God’s wonders. So nothing is impossible.”

He continued, “I feel honoured for this great opportunity. So, if at the end of the day it became otherwise. I will accept it as a will of God. More than anything, God has uplifted me.

Previous: Many top PDP stakeholders dump party for APC in Kwara
Next: Wike turns a ‘new bride’ as Kwankwaso also visits him for support