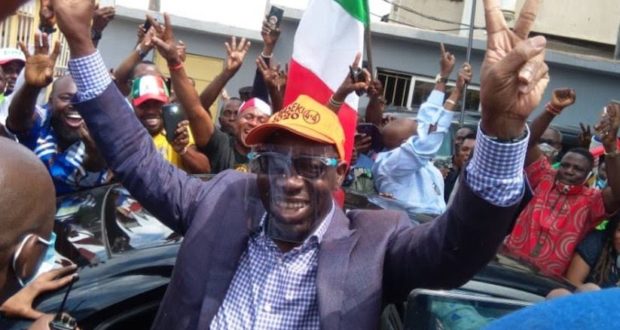 I regret not joining PDP since, says Obaseki

Edo State Governor, Godwin Obaseki, has said he would have joined  the Peoples Democratic Party (PDP) long before he did.

Obaseki said this recently at the PDP National Secretariat.

He said unlike the APC that pushed them out in the rain and storm at their hours of tribulation, the PDP cared so much for its members.

Obaseki said: “It was only when we entered the house (PDP) that we realised that this was the house we should have been in the first instance.

“These are the values we have always been in pursuit of, which we found in this new house in which we have been graciously accommodated.

“My deputy and I are very grateful to this great party. Like I said, you will never know what God has destined for you. In our hours of tribulation, when we were pushed out in the rains and storm from our political party, you came out with that huge umbrella to give us cover and shelter”.

Committee for the quality of governance, the quality of response that I have witnessed. That has enabled us achieve much in less than one week because of the responsiveness of the National Organising Secretary.

“They followed up on every issue and every document. When issues came up, the National Legal Adviser was there to respond to all our inquiries. The National Publicity Secretary checked on us every day”.

The Governor told the PDP leaders the people of Edo state had assured him that they would always follow him to whichever political he chose to belong.

According to him, his decision to join the PDP was a product of wide consultations with Edo people and assured the party leaders of massive votes and victory for the PDP in the September election.

Thanking the party leaders for allowing him to run with his deputy, Obaseki pledged to uphold the ideals of the PDP at all times and to submit to the directives of the leadership.

“I want to commit to you that we shall promote the ideals of this great party and you can always count on us. Whenever the National Working Committee calls on us, we will be there.

“We have no choice because from what I have seen from my brother governors in this party, what they have done and what they did for us in the party, revived my political career, I have never seen that level of commitment”, he said.

While presenting the governor with the certificate of return, the National Chairman of the PDP, Prince Uche Secondus, assured Obaseki of inclusiveness, equity, justice and fairness at all times.

According to him Obaseki’s emergence as the party’s flag bearer followed due process, stressing that the PDP had learnt enough lessons from its past mistakes to not embrace impunity.

“We have learnt from our mistakes and we have reformed so we have come with open arms to embrace everybody. We are not a sectional party, we will not be there and some parts of the country will be crying. Nigeria belongs to all us.

“Today, we have taken an important step to ensure that Edo people believe in us. They believe in us and they will vote for PDP. So from Edo, we will move to Ondo and gradually to all parts of the country.

“Everybody believed that for the governor to join the PDP was a miracle and we are going to have a miracle governor who will win elections for us because you can see clearly the hand of God on this governor and his deputy”, Secondus said.

“We are driven by the fact that we must provide the best governance for our people. Since you came in, you can see that we are guided by process.

“In PDP, the institution here has a system that is transparent, free and fair for all to see and you have witnessed it since the last few weeks. God has been our guide here, we are a people, a party that fear God and we put the interest of our people first not our personal interests”.

While submitting his report, the chairman of the electoral panel that conducted the Edo primaries, Governor Bala Mohammed of Bauchi state, said from what he witnessed in Edo, the state will be won by the PDP.

He said: “Edo is ready for capture. To be won by this very important party, the PDP. I am very sure and confidently that Edo is going to fall in line within the realm of good governance of the PDP”.