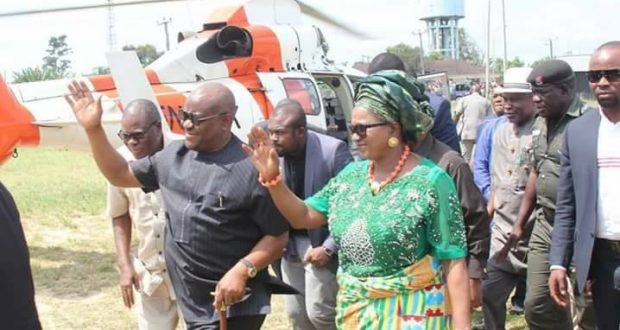 I will fulfill all my promises before 2019, Wike assures Rivers community

Rivers Governor, Nyesom Wike  has said that he would redeem all his electoral promises to Ahoada people by completing all ongoing projects in the local government area.

The governor, who dropped the hint at Ahoada in Ahoada West local government area of Rivers at a traditional reception held in honour of a Senator, Osinakachukwu Ideozu (PDP-Rivers West) by Igbu Ehuda General Assembly of Ahoada, also elevated the stool of Eze Igbu Ehuda III to a 1st Class Status.

“We are making promises because the people of Ahoada deserve projects, I can assure you that all the projects awarded in this area must be completed before the end of our first term,” he added.

Wike noted that all the developmental projects embarked upon by his Administration across the state were designed to improve the living condition of the masses.

He stressed that Eze Ekpeye Logbo remained the paramount traditional ruler in Ekpeye Kingdom, as he elevated the stool of Eze Igbu Ehuda to a 1st class status.

The governor stated that the two Ekpeye Traditional stools elevated to the status of first class were meant to support Eze Ekpeye Logbo to promote the interest of Ekpeye people at the State Traditional Council.

“I will do everything to protect the interest of Ekpeye people, your interest is my interest,” he said.

The governor also inaugurated a Modern Civic Centre for the people of the area.

Previous: PDP, APC, trade words over conduct of Kwara LG polls
Next: Anambra Decides: INEC must do something about the card reader – Umeh