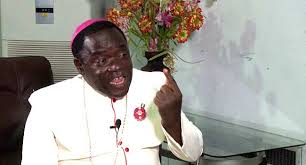 The Bishop of Sokoto Catholic Diocese, Matthew Hassan Kukah, has has cleared the air on the rumour that he is nursing political ambition.

Speaking on the matter, the outspoken cleric said he has no interest in partisan politics.

The catholic cleric also said his comment is being twisted, saying that he did not call for a coup against the government

He said “I have no plan and will never play partisan politics for any reason.

“Those who link my message to partisan politics are only playing to the gallery.

“Take, for instance, brilliant Nigerian youths making comments about Chelsea or Arsenal and have never been to England, does that make them players of such club sides?

“So, why will someone think because Bishop Kukah is speaking therefore he is a politician? People who make this argument are totally ignorant of elementary politics and ignorant of the role of a Priest.

“The truth is that a lot of us have not seen a priest saying what I am saying. The truth of the matter is, we are all in politics, but party politics for me, no. I am not a member of any political party and I cannot be. If it comes to voting, I do my right,” he said.