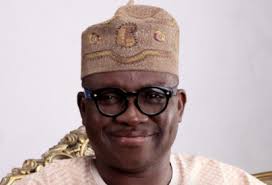 I wonder why Buhari has refused to resign- Fayose blasts President

Former Governor of Ekiti State, Ayo Fayose has said that President Muhammadu Buhari has no business in Aso Rock anymore.

According to the Governor, by refusing to resign, President Buhari was only displaying the attributes of African Presidents

Responding to questions  on Channels Television’s Politics Today, Wednesday, Fayose said that the current administration as fraudulent, saying that none of its promises to the citizens were fulfilled.

“Diesel during Jonathan [administration] was N100 but Diesel today is N700.

“I can’t explain it anymore. I’ve said it over and over. How many educational institutions are shut down today? Nothing works.

“Nigeria is in auto pilot. They should stop giving excuses after seven years. The wife that left my house seven years ago still complains about the black pot in the kitchen that made her to leave.

“They said they can do it better, that dollar will be one to one but dollar is N600 to $1 now. There are two ways to it, it’s either we’re lying, we are elites…we’re politicians we can come here and say sweet things, but the man who bears the brunt knows the truth.

“Let me tell you the truth, this government, they’re 419, original one. They defrauded Nigerians. Someone tells you when he becomes President, the dollar will be one to one and they went further to tell you that these refineries that you see when they come back, Nigeria will have enough fuel and will export to other countries. These things are not adding up.

“Look at the security situation. I listened to General Muhammadu Buhari, I listened to him when he said he is a general and will bring his military experience to bear. But where are we today?

“I learnt they just released one of the victims of the train incident and the terrorists are said to have muscled about over N100m and he was just released quietly. What country are we in?

“If I were President of Nigeria, I would resign for too many reasons. It’s only that we don’t have shame in Africa. African Presidents have no shame, they’ll be sleeping in their vomit.”

Previous: 2023: Look at him, does he look like a president?- Asari Dokubo mocks Wike
Next: Group explains why elections may not hold in 2023