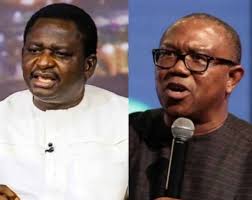 If Not infrastructure, Then What?- Femi Adeshina Attacks Peter Obi

Former Governor of Anambra State and running mate to Atiku Abubakar in the 2019 presidential election, Mr Peter Obi, flew into the eye of the storm some days ago, when he said on the breakfast show of a television station that the Nigerian economy couldn’t be driven on infrastructure development.

Mr Obi, my friend of many years, and member of the People’s Democratic Party (PDP) simply carried opposition politics too far, and got himself into a jumble. What did he spend eight years doing as Governor of Anambra State? Building and developing infrastructure to boost the economy of the state. If not infrastructure, then what? Why then did he say this? “You can’t use infrastructure to drive economic growth. You invest in education and the SME (Small, Medium Enterprises) sector instead to deal with poverty.”

I think the successful businessman and former Governor got completely flummoxed, perplexed, bewildered and bemused, all in the process of trying to run down the Muhammadu Buhari administration, which has been doing great things in infrastructural development in the past six years.

Obi said the thing was to invest in education and the SME. By Jove, where would education or SME be, without infrastructure? And by the way, what is infrastructure? The basic physical and organizational structures and facilities like buildings, roads, power supply, bridges, airports, and others, needed for the operation of a society or enterprise. How does education function without all these? And how do SMEs succeed without them? Our dear friend, Peter Obi got trapped in a labyrinth, became confused and confounded, all in the name of opposition politics.

President Buhari had always lamented the decay and collapse of infrastructure this administration inherited in 2015. No roads, no rail, no power (where is the power?), rickety airports, no bridges, nothing. And he said there couldn’t be development without infrastructure. So he set his sights on reversing the trend. Today, only cynics, skeptics and naysayers would deny the strides made in infrastructure: roads, bridges, rail, airports, pipelines, and many others. By 2022, when most of the massive infrastructural projects are commissioned, even the blind would see it, and the deaf would hear.

Read Also: See how they’re being sent to God to answer for their crimes – Femi Adesina
Heck! I say heck again! What then was our Peter talking about? The Okute missed it, and missed it big time. That is what unbridled and virulent opposition does to an otherwise good man.

Let’s look at the shape of things to come, particularly in 2022 and 2023 in terms of infrastructure development in our country.

The Lagos-Ibadan Expressway had been under one form of rehabilitation or the other in the 16 years of the PDP. No rhythm, no rhyme. No progress. Just the macabre dance of one step forward, and two steps backwards. Now, the estimated completion date of that road is July 2022, and it is being jointly handled by Julius Berger and Reynolds Construction Company. The multi-billion naira project is being heavily financed by the Presidential Infrastructure Development Fund (PIDF). It takes a government committed to the welfare of the people to undertake such. If it was merely interested in stealing, it would simply pocket the funds, as many past administrations had done.

The Second Niger Bridge. Built by PDP with mouth for 16 years. The Buhari administration has pumped in N133.7 billion so far, out of the N206.2 billion contract sum. The bridge is about 70% per cent completed, and estimated commissioning time is last quarter of 2022.

The Abuja-Kano road. Original contract sum was N155.72 billion, out of which N111.1 billion has been disbursed. Work is going on at frenetic pace, and the original 92.5km of the dual carriage way was almost ready, before the scope of the project was changed to total reconstruction of 375km. Estimated time of completion is 2025, and commissioning will be done by the successor to the Buhari administration. A good government transcends its time.

What of the Bodo-Bonny road, in Rivers State? Built under special contractual arrangement with the Nigerian Liquefied Natural Gas Project (NLNG), the 39km project over muddy and swampy soil conditions, cross culverts and 17 large and mini bridges, is due for completion next year. And the people of Bonny will for the first time ever commute on road to the mainland, and not over water. Give me more infrastructure, please.

What of the Ajaokuta-Kaduna-Kano (AKK) pipeline project? Massive. Colossal. Mammoth. And estimated completion date is 2023. Yet, those who institutionalized corruption in this country, and those who perpetuated it for 16 years, are trying to tell us stories about the current level of graft. They should tell it to the marines. Corruption is being robustly fought, and we see remarkable things being done. What did they do in their time, despite huge earnings from oil? Nothing. Absolutely nothing. They only ran the country into a hole.

Monumental rail projects have been awarded, to run round the country. Some are up and running already. Roads neglected for upward of four decades are being rebuilt. Airports have been commissioned. Infrastructure everywhere. And somebody says it should rather be education and SMEs. I hear. Where would those end up without infrastructure?

I remember a meeting we held early last year, at the outset of COVID-19, when it had become apparent that the economy would be shut down, and the country would suffer immensely. President Buhari had told Mrs Zaynab Usman, Minister of Finance, Budget and National Planning: “No matter what happens, ensure that salaries of government workers do not fail. Pensions must be paid. And funding of infrastructure projects must not stop.”

Now, we are at the threshold of reaping the benefits. Yet, some people want to downplay infrastructure, and play up insecurity, all in an attempt to vitiate the achievements of the Buhari administration. Will they succeed? Never! Insecurity will end, and soon too, and infrastructure will hugely decorate the landscape.

I am glad Buhari came our way when he did, otherwise, what would we be talking about today? Hard to contemplate.