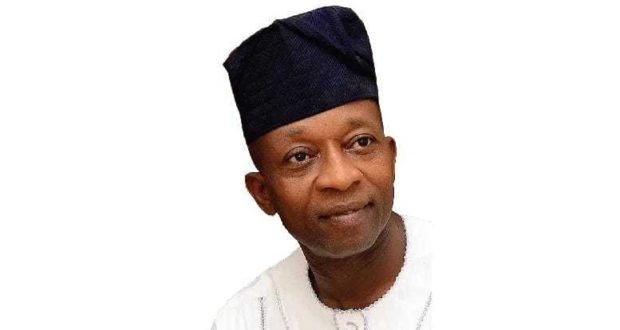 Lagos Assembly member representing Oshodi/Isolo Constituency 2 in the Lagos State House of Assembly, Jude Idimogu is now the the new Igbo Leader in the of the All Progressives Congress (APC).in Lagos .

He was endorsed by Igbo caucus of APC in the state.

Idimogu, who is the Chairman House Committee on Wealth Creation and Employment, was unanimously endorsed at the Ohanaeze Ndigbo Secretariat in Surulere, Lagos by all the Eze Ndigbo in the 20 local governments and the 37 local council development areas.

The selection was ratified by virtually all the Igbo leaders in Lagos, among who are the Eze Ndigbo of Lagos State and Chairman, Igbo Council of Ndieze in Lagos Christian Uchechukwu Nwachukwu, Eze Guy Nwajiofor (Ajeromi), Eze Ofordile Nwajei, Eze Orji Okafor, Eze Nnaemeka Agbo, Eze Ohaegbo Policap, Eze Ohazuluike Omereoha and a host of others.

While speaking with reporters after the ceremony, the lawmaker explained that the stakeholders felt that the Igbo were marginalised by some people who claimed to be anointed leaders.

Idimogu said: “Ndieze (the leaders) have viewed and screened me and were convinced that I am someone who has the interest of the Igbo in Lagos State at heart. I have not been happy towards the performance of the Igbo in APC in Lagos State, especially during the last election.

“Every success of a party lies in the leadership. I know quite well that the position is for me. Now, I’m ready to take the bull by the horn. Most Igbo tend to vote against our party because the leadership of the Igbo doesn’t reach them on time.

The Ignorance are very proud people who are self-dependent that cannot be lured or bribed. Now is the time to win them over by giving them the reason why they should support the party and not wait till election is close before we go to them and win them over.”

Continuing, he said: “Now that I have emerged as the Apex Leader of Ndigbo, I am particular about sacrifice because that is what leadership is all about.

I am ready to make sacrifices for my people. I’m here to protect their rights. I also want them to know that nothing goes for nothing.

They should obey the laws of the land because we are strangers in the land and we do not argue with that fact. We also have to thank the Yoruba who are very accommodating.

“You can’t be progressing in a state and not support the ruling party. I have their interest in mind; their welfare and concern are what I have to intervene for with the government. They should expect something from the government as well.

This is why you need leaders that are accountable and open-minded who put you first before any other thing. If I leave the state today, I will return to the Southeast. That is the more reason why I should make sure they are protected.”

Nwachukwu described Idimogu as a worthy ambassador, saying he is the only Igbo man that has won election twice in Lagos and therefore deserves to take the mantle of leadership.

Nwachukwu’s words: “Idimogu is the only one to have won elective position twice and is also married to a Yoruba woman from Ijebu Ode, Lady Roselyn Idimogu, who has been very supportive to the Igbo course in the state.

Idimogu, who represents Oshodi/Isolo Constituency 2, has credibility at the state, local government and ward levels. He deserves it and he has effectively taken the reins of power as Apex Leader from Joe Igbokwe.”

The President, Ohanaeze Ndigbo Lagos, Chief Solomon Ogbonna, backed the choice of the Igbo community. who noted that the body is apolitical, insisted that once Ndigbo in the APC decides in favour of Idimogu so be it.

Ogbonna who noted that the body is apolitical, nevertheless, said it is his desire as the number one Igbo resident in Lagos to ensure that the APC gets a better deal from Ndigbo in the state. He stressed that their being on the side of the opposition has done them more harm than good.

He added: “I will ensure all Ndigbo in Lagos State support APC. Though Ohanaeze Ndigbo is apolitical, we can command and guide others to do what we see as beneficial to all.

Idimogu came to pay allegiance to me as the face of Ndigbo in Lagos State, but I believe it will help him a lot if he teams up with other Igbo members of the APC.

“This will be the first time Igbo people will embrace the APC. When I raised up Sanwo-Olu’s hand in the presence of many, I urged Ndigbo to be politically active by supporting the party in power.

Every Igbo man must embrace the APC because it is the ruling party both at the state and national levels. Any Igbo that refuses to accept this is on his own. Ndigbo in Lagos have benefited immensely from being guests to Lagos State

Previous: I won’t decamp, my reelection will be achieved in APC, Obaseki vows
Next: APC vows to expel members who accepted appointments from Adamawa Governor