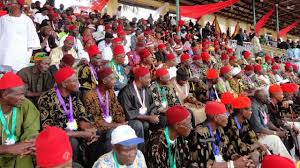 The youth wing of the apex Igbo socio-cultural organization, Ohanaeze Ndigbo has condemned the attack stages against a political meeting at Aninri Local Government Area of Enugu State by unknown gunmen.

It will be recalled that some daredevil gunmenstormed the venue of the political meeting and sent party members running for their lives.

It was learnt that the hoodlums claimed to be members of the Eastern Security Network, ESN, an arm of the Indigenous People of Biafra, IPOB.

Reacting, the President-General, Ohanaeze Ndigbo Youth Council Worldwide, Mazi Okwu Nnabuike said so many atrocities were now being committed with the name of ESN and IPOB.

According to him, it was high time the IPOB leadership rose to the occasion and fished out those using its identity to perpetrate criminal activities.

Okwu said, “we were alarmed over the reported attack on a ward meeting by gunmen who said they were members of ESN. This incident came to us as a shock because the ESN is not known to have turned the fight against her own people.

“We find it strange that people who claimed to be of Igbo extraction could storm a political meeting and unleash such mayhem on their fellow Igbo men and women. It is totally unacceptable.

“When the ESN was formed, it was said to be a tool to combat killer Fulani herdsmen; how suddenly did our fellow Igbos become killer herdsmen that the war has now turned against them?”

The OYC President said there were indications that “people are now using ESN to settle scores and this is why we are calling on IPOB to rise to the occasion, it must fish out those perpetrating evil.

“The people behind this are not helping Nnamdi Kanu; they are doing everything to demonize IPOB and the sole aim is to keep Nnamdi perpetually in custody.”

While cautioning on the dangers of Ndigbo fighting among themselves, Okwu said “the IPOB should not fold its hands and watch people desecrate its name. It must go the extra mile to fish out those using its name to commit atrocities. We can’t destroy our place on the guise of fighting enemies. A house divided against itself can never stand.