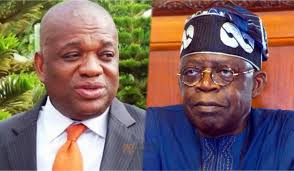 The former Governor of Abia State Orji Uzor Kalu has said Igbo people would be the greatest beneficiaries of Bola Tinubu`s presidency if he wins the 2023 poll.

Speaking to newsmen on Tuesday, the current Senate Chief Whip, said the All Progressives Congress (APC) presidential candidate would love and embrace.

“Let me be honest with you, we were governors together, he is a strategist, he will make the presidency benefit the Igbo.

“The Igbo people are going to be the biggest beneficiary of Tinubu’s presidency and you will see it. Hold me responsible”, he said.

According to the APC chieftain, he is not against a president of Igbo extraction, saying that being a  Nigeria’s president is not a regional issue.

“If anyone is to be nominated as president of Igbo extraction, I could have been the one, but I see it not feasible yet. This is a party business, I have no business of whoever is running, for me it is not personal, but it is political and a party affair. It is about a party winning election, I have chosen to be in APC so why should I vote against Bola Tinubu, it is madness and I am not going to do it.

“It is the party you belong to that you will deliver, we will wait for another time to see how Nigerians will agree to zone the presidency to the East. But for now our presidential candidate is Bola Ahmed Tinubu and I will vote for him,” he said.

He called on other aspirants who contested alongside  with Tinubu at the primary to come together and ensure the victory of the ruling party in 2023.

The frontline politician added that  threat of impeachment by the opposition senators against President Muhammadu Buhari would not work.

“We have the number to defend the President and Senate President on the floor. President Buhari has done well in most areas and we also had failures in some areas. I know senators were agitated about the insecurity and we have addressed the issue, we had a conference with the military,“he said

Previous: NASS fully ready to support INEC on fair and credible elections- Lawan
Next: Just in: Wike and allies pull out of Atiku’s campaign