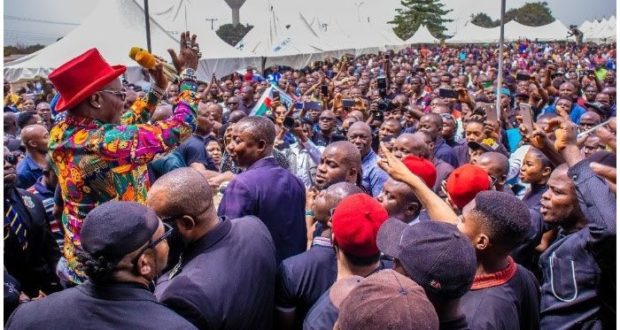 Charly Boy, who spoke during the march, said the judgment of the apex Court which sacked Emeka Ihedioha and replaced him with Hope Uzodinma on January 14 was a miscarriage of justice.

According to Punch, he said that the group was protesting the Supreme Court’s judgment and urging it to restore the mandate of Ihedioha,.

The activist said that his father, Justice Chukwudife Oputa, who headed the Supreme Court at a point told him that the apex court can make mistakes.

Oputa, who spoke in a mix of the Igbo, pidgin and English languages said his late father impressed in him to fight injustice since the age of ten.

“What we are here to say is very simple. We have come to ask the Supreme Court to reverse its judgment and return justice to Imo State. What was done a few weeks ago by the Supreme Court was a miscarriage of justice.

Previous: Panic in Imo as supporters of APC, PDP clash
Next: Guber Poll: APC is dead in Edo if Obaseki is denied ticket, says ex-Commissioner