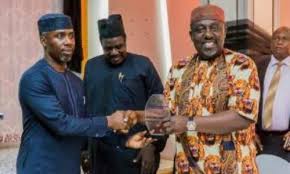 Ex-governor of Imo State and current Senator of the federal republic, Rochas Okorocha has denied the report that he has started campaigning Uche Nwosu  ahead of the 2023 Imo governorship poll.

Okorocha said some media houses have been awash with the news report that the he has been making move to make Nwosu the next Governor.

Recall that Nwosu  who is Okorocha’s son-in-law contested the 2019 governorship position.

In a statement signed by the media office of Okorocha said “Those whose programme or only project for Imo people, has remained Okorocha, even almost two years after he had left as the governor of the state and has been busy with legislative business in the senate, had gone to town with the false claim that Okorocha had begun to campaign for Nwosu, for the 2023 Imo governorship.

“In marketing that falsehood, they had said that Okorocha made the statement at the empowerment programme of Rt. Hon Ugonna Ozuruigbo, a member of the House of Representatives. Okorocha would not have begun to campaign for Nwosu at such an event by one of the strongest members of his political family.

“At the programme in question, Okorocha had highly commended Ozuruigbo and also added that all the members of the House of Representatives who are members of his political family, have been doing exceptionally well and added that, if Ugumba Nwosu had become governor in 2019, he would have also done very well, to the delight of Imo people and to all and sundry.

The statement added that some detractors who don’t have the capability to govern are the ones making move to destroy his image.

“Those who are still cowed by Okorocha’s monumental achievements as governor, and who have been finding it difficult to cope with the burden of governance, and who also think that the only way they can measure up or level up is by either destroying some of Okorocha’s signature projects or by blackmailing him, injected virus into that innocent comment to achieve their petty goal. Having been denied his obvious victory in the 2019 governorship election, Nwosu had since, moved on with his life. Okorocha had also kept that incident behind him.”

It continued, “It is important to also state that, the only way anybody can diminish Okorocha’s popularity in Imo or stop Imo people from loving him, is by achieving more than him. Any other approach or method to lower the antenna of his amazing achievements in Imo will not work.”

Previous: Despite criticising Buhari, I won’t call for his impeachment- Lamido
Next: How I will diagrace my critics- Gov Wike