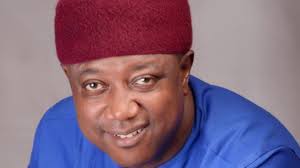 Governor Hope Uzodinma and Senator Ifeanyi Araraume have been bickering barely three days after the Imo North Senatorial by-Election won by APC without a candidate.

In an interview with AIT , Ifeanyi Araraume accused Governor Hope Uzodinma of destroying supporting Frank Ibezim, whom he said never took part in the primaries.

“Governor Hope Uzodinma is gradually destroying APC with his greed and show of supremacy. Despite the fact that he is the Governor, he does not own the state. He should know that there are some leaders in the state who also deserve a level of respect.

“Everybody knows how rooted I am in Okigwe zone. I have a very strong relationship with my people that they wouldn’t have chosen another in place of me.

“Frank Ibezim is not my match in the zone and never contested the party’s primaries. His name was not in the ballot. The Governor knows these but only wants to show his powers as a Governor.

“We all know Frank Ibezim was disqualified by a court of competent jurisdiction before the December 5th bye-election, and that suit was not appealed,” he explained.

Meanwhile, the Governor vdescribed the position of the former Senator  drowning man who is just crying over spilt milk.