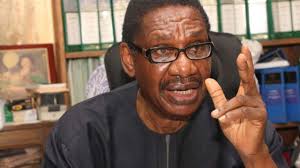 Impeaching Buhari over insecurity will be abuse of power- Sagay

Presidential Advisory Committee Against Corruption, Prof Itse Sagay has said it will amount to an abuse of impeachment power to impeach Buhari because of insecurity.

He said this during an interview with SaharaReporters on Thursday, while reacting to recent calls for Buhari’s impeachment across the country.

He also criticised the opposition party, People Democratic Party, for calling for the impeachment of the president.

“Calling for the impeachment of Buhari based on insecurity is an abuse of impeachment power. There is nothing wrong in criticising him so he can do more. But I don’t think there’s anything he has not done that warrants calling for his impeachment,” Sagay said.

“What do you expect from the PDP? Their chairman was dancing in Abuja because innocent children were kidnapped. The PDP doesn’t care about the country. The PDP is not an organization. Impeachment is not what we use against a responsible man.

“We don’t use impeachment because of security issues, it has to be something that affects the character, commitment, honesty and integrity of the person in power, not just because of unfortunate happenings under the person’s watch.”

When asked about the kind of offence that could justify the commencement of impeachment proceedings against the president, Sagay said, “I can’t tell you what he would do to warrant his impeachment, so you won’t be going out to promote his impeachment.”

Previous: I will not relent in my efforts to ensure greater lagos- Sanwo-Olu
Next: Oyo Politics: “You are fulfilling my dream,”Ladoja tells Makinde