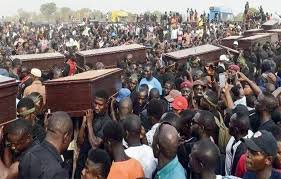 A group called Southern Kaduna indigenes have expressed fear that incessant  killings in their communities are to disenfranchise them from participating in the 2023 general elections.

The spokesman of SOKAPU, Luka Binniyat, in a statement lamented that the invaders are allowed to violently exploit their lands.

He called on the government to take urgent steps to fish out the perpetrators of the heinous crimes and return all displaced persons to the communities very urgently.

The spokesman explained, “As we approach the 2023 general elections, we already have over 200,000 who have been displaced by violence from over 145 communities in five LGAs of Southern Kaduna.”

“There is little hope that they will return to their voting points before the general elections. If their villages are not secured for their safe and peaceful return, SOKAPU would have no reason not to believe that the main aim of the attacks on their communities is to disenfranchise them while the invaders are allowed to violently expropriate their lands to their use as the booty of their unchallenged crime,” the statement added.

According to the statement, each day and night people are killed or kidnapped with the government looking on, stressing that it is very obvious that the insecurity in Southern Kaduna is getting worse by the day.

The SOKAPU spokesman explained that on the 18th of May, 2022, Achinge Luka, 35 and a widower, was riding on his motorbike at the beleaguered Unguwan Magaji village, Kamaru ward, Kauru LGA in Southern Kaduna when armed Fulani herdsmen men laid ambush and shot him dead, adding that they went away with his bike.

It said Luka’s case is most pathetic because his wife and only child were killed in last year’s August 2 attack on Unguwan Magaji and environs in which SOKAPU reported the massacre of over 70 persons by armed Fulani Herdsmen.

The statement further explained that Unguwan Magaji has been attacked about five times in two years with scores of people killed and property looted and burnt, yet no culprit has been apprehended.

According to the statement, “The invaders who attacked the village around 2am also kidnapped nine (9). Their whereabouts is still unknown.”

He stated that on the 16th May 2022, armed men invaded Pavilion Estate, Gidan Waya town in Jema’a local government area and abducted Racheal Edwin 24, a 200 Level Biology/Geography student and Esther Ishaya, 23, an Economics/History 200 level student, Beauty Luka, 23, who is a 300 Level Special Needs/CRS student and Promise Tanimu 22, an English/History 200 Level student, all students of College of Education, Gidan Waya.

He explained that the kidnappers have established contact and are demanding N45 million as ransom before releasing the students.

According to him, on Sunday 8th, May 2022, armed Fulani herdsmen ambushed and shot 3 persons in broad daylight in Kigam village, Kamaru ward, Chawai Chiefdom of Kauru local government area and burnt down a motorbike, saying that Danlami Garba 28, and Aga Garba 26, of same parents, were killed in the attack while Sunday Musa (m) 25, escaped with severe gunshot wounds and is currently taking treatment at a hospital in Jos.

He explained that the situation would have been worst if not for the timely intervention of men of Operation Safe Haven stationed nearby, the attackers would have done more harm to the community which has been attacked many times in the past two years.

Previous: Leadership failure of APC govt led to insecurity- Saraki
Next: “Fayose has betrayed me,” says ex-Ekiti dep gov as he withdraws from senatorial race