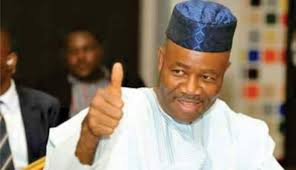 INEC rejects primaries that produced Akpabio as a senatorial candidate

The political future of Godswill Akpabio now looks dim as the electoral umpire, Independent National Electoral Commission (INEC) has rejected the primaries which produced him in the Akwa Ibom North West senatorial district.

Akpabio, the former Governor of Akwa ibom Statey, was declared winner of a senatorial primary conducted on Thursday.

Speaking, the  State APC Chairman, Mr Stephen Ntukekpo, had said he was directed by the national secretariat of APC to carry out a re-run over alleged infractions.

But speaking with newsmen in Uyo, Akwa Ibom State capital, on Sunday, the Resident Electoral Commissioner, Akwa Ibom State, Mr Mike Igini, said the commission would only recognise the winner of the primaries monitored by INEC.

According to him, the commission did not monitored the re-run APC senatorial primaries, where Akpabio emerged winner.

“The primaries was concluded on the 27th of last month, so I don’t know what you are talking about. The one that was conducted was monitored by INEC and the report has been submitted to Abuja.

“INEC is not aware of any senatorial primaries conducted on Thursday (June 9) that was monitored by INEC, none,” he stated.

Previous: I will stand by Tinubu if he picks a Muslim running mate- Fani-Kayode
Next: I will pick somebody who is formidable as my running mate – Atiku