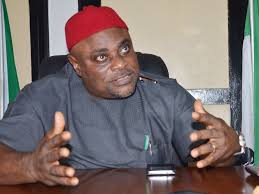 INEC should not be biased, must save Nigeria’s democracy- APGA Chairman

The National Chairman of the All Progressives Grand Alliance, Chief Victor Oye, has called on the electoral umpire, the  Independent National Electoral Commission to save Nigeria’s democracy.

Speaking in a statement in Abuja,  he said that INEC had an opportunity to redeem its image as its commissioners meet, in Abuja, on Tuesday.

According to him, the nation’s electoral umpire must exhibit neutrality at all times and resist the temptation

He said “We were the first political party that uploaded the particulars of our governorship candidate and deputy to INEC on July 2, 2021, in accordance with the electoral act .

“According to section 313, of the electoral Act 2010 as amended, INEC was expected to have published that name within seven days of uploading of those particulars but they waited till July 15, 2021, 13 days after to concoct what they did on July 16, 2021.

“For me, the only way INEC can redeem their image is to reverse itself immediately ,they should not wait for one minute .

“The judgment solved all the legal puzzles you could ever think of, so what is holding INEC from implementing that?”

He said that there is no iota of truth in the  claims that there was a leadership crisis in APGA.