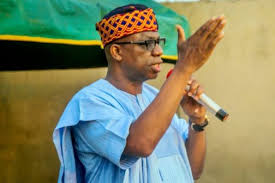 For admitting that Kidnappings and cultism are the greatest challenges facing the people of Ogun State, Peoples Democratic Party (PDP) has blasted Governor Dapo Abiodun, saying that he has  consciously admitted failure.

Goverrnor Abiodun had said “the biggest issue we have today in Ogun State is that of random kidnapping and cult activities.”

He said, “we are still struggling and dealing with issues that relate to kidnapping of contractors, farmers and innocent Ogun State residents.”

Reacting, the PDP in Ogun State said it was good that the governor had owned up to certain truth.

In an interview with newsmenon Sunday, the Publicity Secretary of the PDP in Ogun State, Akinloye Bankole, explained that the Abiodun government has failed in its primary responsibility.

According to Bankole, the primary responsibility of any government across the globe is the protection of lives and property.

He regretted that it is a failure for a governor to admit that kidnapping and cultism reign supreme in his State.

He described as unfortunate, the fact that Ogun people found themselves in what he called a mess.

“We should thank God that the governor has the courage to own up to certain truth. Gov Abiodun has consciously admitted his failure.

“Like we know anywhere in the world, the primary function of any sensible government is the protection of lives and property of its citizens. When a governor now admits that kidnapping and banditry reign supreme in his state, under his watch, it tells you that he has failed and it is unfortunate that we have found ourselves in this kind of a mess,” Bankole maintained.

He spoke further that the Governor should rise up and ensure the lives and belongings of all Ogun residents are protected irrespective of where they live across the State.

He charged him to make judicious use of his security votes and stop the killing and kidnapping of innocent Ogun people.