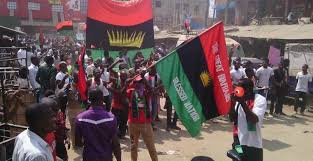 A member of the House of Representatives, Obinna Chidoka has disclosed that politicians in Anambra State are scared of using the logos of any of the political parties due to the fear of the Indigenous People of Biafra (IPOB), a

The federal lawmaker made this statement while contributing to a motion moved by Emeka Azubogu on Tuesday.

He said criminal elements have infiltrated the IPOB movement and are causing mayhem in the region.

According to him, lawmakers from the southeast are now scared of going home due to fear of attacks of IPOB.

He added that the ongoing campaigns ahead of the November 6 gubernatorial election, politicians dare not put the logo of their parties on branded vehicles.

“You can see that they are targeting campaign vehicles, all our cars with campaign materials, we have removed all of them, no flag of APC, no flag of PDP, nobody, and they are not sparing anybody. So you see, it is a mixture of pro-Biafra and strong criminal elements,” he said.

He explained that the agitation for Biafra has turned violent because the group has been infiltrated by “criminals” who are causing mayhem.

Also, he urged the members of the Nigeria Police Force to stand up to their responsibility, by accepting that by joining, they accepted to sign a death warrant.

”That is why I pray that the police should stand up. They shouldn’t run, the idea of enlisting in the army, or police is that you know that one day, you might die in the battle if I decide to join the police– I know that I have signed the warrant to die. They should go back there and fight. They should not allow them to burn their offices.”