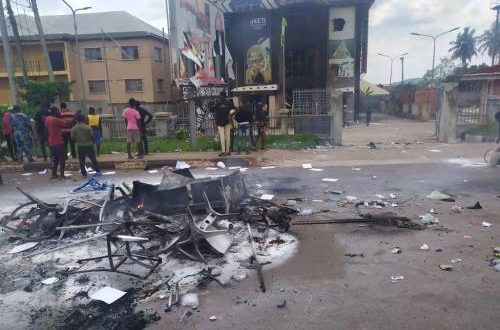 The violence protests in some parts of Ondo State snowballed into another dimension on Thursday afternoon as some rampaging youths brunt the campaign office of Governor Rotimi Akeredolu in Akure, the state capital.

Angry residents had been damaging public buildings and those of persons they consider to be part of their problem after security operatives started attacking and killing peaceful protesters in many parts of the country.

Two police stations had earlier been attacked in Ondo while a mob attacked the Nigerian Correctional Centre in the town and freed prisoners in the facility.

Previous: Protest: SDP warns Nigerian youths against violence
Next: Just in: At last, President Buhari to address Nigerians by 7pm