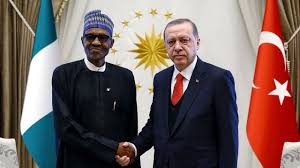 MURIC blasted the president ahead of his arrival in Nigeria today, Monday, on a state visit.

The group in a statement signed by its director, Prof. Ishaq Akintola, accused Erdogan of arbitrary arrest, torture, political killings, long imprisonment of opposition figures and critics, particularly members of the Hizmet Movement.

Buhari is expected to sign some business deals with the Nigerian government led by President Muhammadu Buhari.

MURIC claimed that Erdogan’s visit leaves a sour taste in the mouth because of his alleged undemocratic and tyrannical practices back home in Turkey.

“He cooked up a phantom coup on 15th July, 2016 to justify sweeping changes to the constitution and he arrogated extensive powers to himself as president,” MURIC said.

“Travelling documents of key members of Hizmet were seized, and their properties were confiscated. They were thrown in jail in their thousands without fair trial. Members of the group who were outside Turkey were disallowed from returning.

“Though Hizmet is not a political movement that could threaten his position, yet like all dictators and tyrants, Erdogan was envious of the group because the latter had become extremely popular.

“Erdogan uses its diplomats in Nigeria to haunt Turkish citizens and members of the Hizmet Movement who are rendering humanitarian services in the country. They were declared persona non grata in Turkey and disallowed to enter their country of origin. Their travelling documents were seized, thereby denying them right of return.

“Erdogan also uses his diplomats in Nigeria to label members of the Hizmet as terrorists. This is a very wicked attempt to push Nigerian security agencies to arrest, intimidate and unduely punish innocent refugees and asylum seekers.

“Members of their families whom they left behind in Turkey are also not allowed to travel out to unite with their loved ones in Nigeria. Thus we find Recep the tyrant masquerading as a liberal, Tayyip the dictator disguising as a democrat and Erdogan the bully pretending to be a hero. Afraid of his own shadow, Erdogan has forcefully separated husbands from their wives and children from their parents.

“MURIC affirms clearly, unequivocally and categorically that members of Hizmet are peace-loving people who are committed to the service of Nigerians and other people of the world. This they do by establishing primary and secondary schools of international standard as well as universities and hospitals. They also assist in building boreholes in Nigeria’s public schools and villages.

“Hizmet is, therefore, a mere network of humanitarian workers committed to the upliftment of mankind from ignorance to knowledge and from the abyss of poverty to the pinnacle of economic emancipation. This is service to humanity per excellence. How can anyone in his right senses accuse such a movement of being a terrorist group?

“MURIC rejects the double standard and hypocritical pretence of President Recep Tayyip Erdogan. We charge him to leave members of Hizmet who are resident in Nigeria alone. We call on Erdogan to fling open the doors of Turkish prisons and torture chambers if he wants to be embraced by the international community.

“The whole world is now fully aware that Erdogan is an enemy of democracy. Allah-given fundamental human rights, including freedom of speech, freedom of movement, freedom of association and the rule of law are alien to Erdogan’s political philosophy. The whole of Turkey has become a huge prison camp in the grips of a vicious ruler.

“We appeal to the world community to intervene in the case of prisoners of conscience in Turkey. Thousands are languishing in jail without trial. Too many people are being tortured by Erdogan’s agents. Hundreds of Turkey citizens who have loved ones outside the country should be allowed to travel out. We call on Amnesty International and all other civil society groups around the world to speak out against Erdogan’s inhumanity to his perceived enemies.

“We urge President Muhammadu Buhari to be wary of the antics of the Turkish president as they both engage in business deals for their two countries. Erdogan is the modern fox of the Balkans, the Otto Von Bismarck of the Mediterranean and the Jekyll and Hyde of the Black Sea. Erdogan is not to be trusted. There is no scintilla of humanity in him.”

Previous: Why APC will take over Benue in 2023- Akume
Next: I am disappointed in Buhari, but I don’t regret voting for him- Jide Kosoko