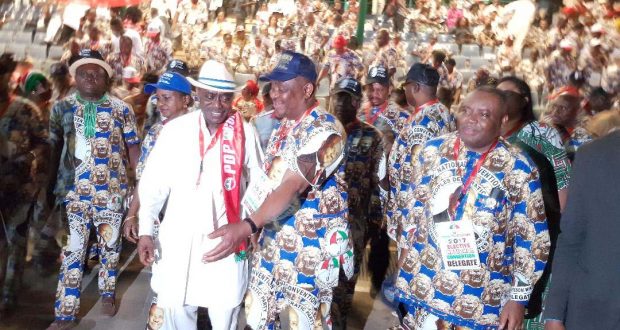 It’s a surprise that even an election as organised as this, somebody will still cry – Wike

One of the gladiators of the December 9 National Convention of the Peoples Democratic Party (PDP), says the process was transparent with a credible voting process.

Addressing journalists after casting his vote for different candidates at the National Convention at the Eagle Square in Abuja on Saturday, Wike said with the successful convention, PDP has been positioned to serve as a credible opposition against the ruling All Progressives Congress (APC).

He said: ” This election has been quite credible. It has been very transparent. Done in the full glare of the world.

“We are prepared to be an opposition as expected to the ruling party come 2019”. Commenting on those who are still criticising the process, Wike expressed surprise that anyone would fault the process that created room for the exhibition of true democracy.

“If you have not done your homework well, you come forward to cry foul. It is surprising that even an election as organised as this, somebody will still cry. “You have an exam and you don’t prepare, but you expect to win. “, Wike said.

Previous: #PDPConvention2017: Here comes the new National Executive of PDP
Next: PDP is a party with corruption deeply rooted in its DNA, says APC