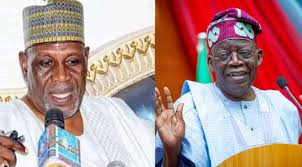 The running mate to the late MKO Abiola during the June 12 1993 Babagana Kingibe, a  has endorsed the All Progressives Congress, APC, presidential candidate, Bola Tinubu as Nigeria’s next President.

Kingibe said Tinubu deserves to succeed President Buhari due to his sacrifices.

The former Secretary to the Government of the Federation, SGF, said this during a meeting with Tinubu over the weekend.

It will be recalled that on  Wednesday, Tinubu emerged as APC presidential candidate after polling the highest number of votes at the party’s primary election in Abuja.

The former Governor of Lagos State polled 1,271 votes to defeat other presidential aspirants of the party.

Previous: I will pick somebody who is formidable as my running mate – Atiku
Next: Wike is an enemy of Islam, don’t use him as running mate- MURIC warns Atiku