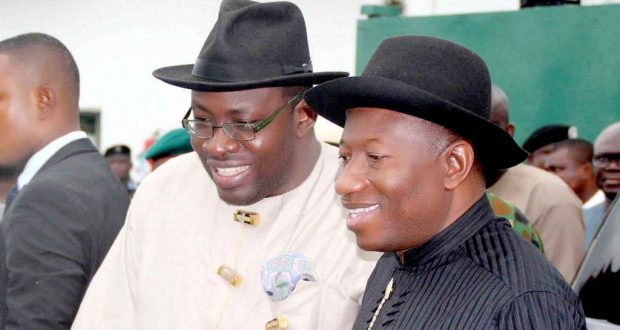 Former President Goodluck Jonathan has said that there is no rift between him and Bayelsa Governor, Seriake Dickson contrary to perceptions held by some.

According to a statement issued by Francis Agbo, Chief Press Secretary to Governor Dickson, Jonathan attributed the false news on a political rivalry between the two to handiwork of mischief makers.

The statement quoted Jonathan to have gone down memory lane, and recalled how he persuaded Dickson to join the Peoples Democratic Party (PDP) while he was the governor of the state between December 9, 2005 and May 29, 2007.

According to the statement, Jonathan made the clarification in his Otuoke home, during a condolence visit by Dickson to commiserate with him on the death of the Paramount Ruler of Otuoke Community, Lot Justin Ogiasa.

Jonathan said, “Let me on behalf of the community thank you for making the visit, because of the relationship we have.

“You wanted to come immediately, but said it would be a waste of time for the governor to come when the date for the burial had not been announced.

“For me politics is a very useless business, when I see the kind of things people write about me in the social media, I just laugh.

“For Bayelsa State, I feel sad because we are not many and we are not heterogeneous. It is a state that we also know ourselves.

“I have no reasons to say that I am competing with the governor, by the grace of God, I became Deputy Governor, and later on Governor of Bayelsa and President of Nigeria.

“There is no way I can sit anywhere and plan evil against Bayelsa or the governor.

“When I was dreaming of becoming a governor, Dickson was amongst the very few in the meetings we were holding. Though; he was not in PDP then, but he opted to help.

“He said he didn’t want to be in the PDP, but I virtually forced him to join PDP.

“When I became governor, I appointed Dickson the Commissioner for Justice and Attorney General and that was how he joined PDP, and later became a member of House of Representatives and so on.

“There is no way I will break my relationship with the governor.” Jonathan said.