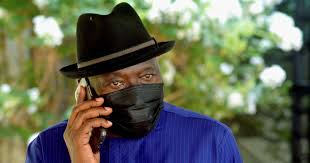 Ex-Presidentof Nigeria, Goodluck Jonathan, on Monday, met with the National Chairman of the All Progressives Congress (APC), Abdullahi Adamu.

The meeting took place in Abuja hours after Miyetti Allah Cattle Breeders’ Association purchased the N100million presidential form for Jonathan ahead of the 2023 election.

It was gathered that the former leader told  told Adamu that he is unaware of the group’s decision to buy the form.

Unconfirmed report said that he told Adamu that it is an insult.

He reportedly told Adamu  that he will make it official when he decides to contest.

Jonathan joined the Peoples Democratic Party in 1998 and went on to be elected deputy governor, governor, vice-president and president on the party’s platform.

He is yet to formally announce his membership of the APC, who he lost the 2015 elections to as incumbent.