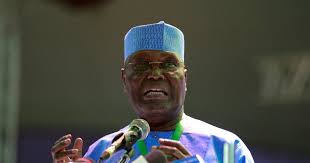 June 12: Atiku fires back at Keyamo, calls him a liar

Ex-Vice President, Atiku Abubakar, has accused the Minister of State for Labour and Employment, Festus Keyamo of trying to manipulate history.

It will be recalled that Keyamo had said that Atiku  was among the first Nigerians to abandon the June 23 struggle.

According to him, the Turaki of Adamawa , former President Olusegun Obasanjo and some of the current presidential candidates never played any role in the June 12 struggle.

He added that only  Bola Tinubu, the All Progressives Congress, APC, presidential candidate, played a  role in the June 12 struggle, adding that  Tinubu should be allowed to rule Nigeria in 2023.

In a swift response, the Peoples Democratic Party, PDP, presidential candidate,    dismissed Keyamo’s remark of him abandoning the June 12 struggle.

His response was contained in a tweet by his Media Aide, Paul Ibe.

“The events of the June 12 crisis are too well documented for anyone to seek to distort it. Keyamo told a blatant lie when he said Atiku “abandon(ed) June 12″. Atiku never abandoned June 12.”