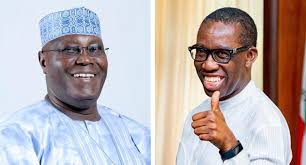 Atiku made the announcement on Thursday afternoon at the PDP national headquarters in Abuja.

He said one of the considerations for Okowa’s choice was his suitability to succeed him after his tenure in office if eventually elected as president.

“I am delighted to announce Governor Ifeanyi A. Okowa as my Vice Presidential candidate. I look forward to travelling our great country together, engaging with all Nigerians and building a shared future of peace, unity, and prosperity for all,” Atiku said.

Before this development, there have been some speculations circulating on the social media that Atiku may settle for governor Nyesom Wike of Rivers.

A media platform even alleged that  the Rivers Governor has bribed some officials of the People Democratic party PDP for him to be chosen as the running mate for Atiku. PDP later dismissed the claim that the opposition party had settled for Atiku.

Previous: Sources say Tinubu opts for gov Masari as running mate
Next: I played a major role in restoring Peter Obi as gov after impeachment- Mbaka