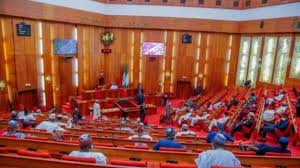 The members of the ruling party,  All Progressives Congress in the Senate on Thursday voted against electronic transmission of results when the matter was thrown to the house for voting.

It should be noted that the committee in its report recommended that NEC “may transmit results of elections by electronic means where and when practicable,” according to Section 52(3 of the Bill.

However, a new twist played out when an APC senator from Niger North, Sabi Abdullahi, amended the clause to read, “INEC may consider electronic collation of results, provided the national network coverage is adjudged to be adequate and secured by the Nigerian Communications Commission and approved by the National Assembly.”

It will be recalled that Senate Committee on Communications had earlier said that the NCC had declared that only 43 per cent of the country was currently under effective telecommunications coverage.

A disagreement ensued and the  the Minority Leader, Enyinnaya Abaribe, called for  individual voting on the floor.

The results of the election revealed that  52 APC senators, including the chairman of the Senate INEC committee, Kabiru Gaya, voted against the panel’s report, which gives INEC the sole power to determine the practicability of electronic transmission of results.

The outcome of the election also showed that all Peoples Democratic Party members on the floor all voted in favour of electronic transmission of results by the electoral umpire without interference from either the NCC or the National Assembly.

According to APC Senators,  their decision was due to claim of the NCC that only 43 per cent of the country has network coverage.

The PDP senators,  said that the integrity of the INEC would be eroded if thet theNCC and the National Assembly to meddle in its affairs.

Previous: Why Tinubu should be elected as the next President- Joe Igbokwe
Next: Voting against transmission of results put APC on wrong side of history- Senator Gyang