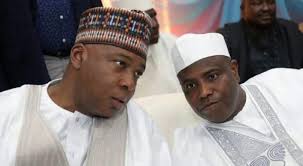 One of the presidential aspirants who is also the Governor of Sokoto State Aminu Tambuwal has stepped down as aspirant of the People’s Democratic Party, PDP, during the conduct of the primary election.

The primary election which is going on in Abuja is to elect the aspirant that will pick the presidential ticket for the party.

According to him, having consulted widely and as one of the leaders of this country, he has come down to step down form the contest.