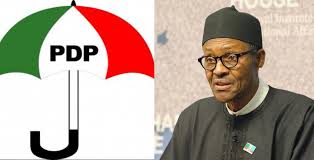 The major opposition party, the  Peoples Democratic Party (PDP), on Wednesday, said the successful attack on the Abuja-Kaduna train passengers by terrorists confirms its stand that the security command and control coordination structure under President Buhari has collapsed.

The remark was made by Hon. Debo Ologunagba, the National Publicity Secretary of the party in a statement on Wednesday,

He condemned the high rate of insecurity and near worthlessness of the lives of Nigerians under the All Progressives Congress (APC) government.

According to the statement, “more alarming is the fact that this particular attack took place within two days of the deadly terrorists’ attack on the Kaduna International Airport on Saturday, March 26, 2022, in the same Kaduna State controlled by an APC government.”

It insisted that the complicity of silence by the Buhari administration on the Saturday’s airport attack emboldened the terrorists to assault the train, a development the PDP said validated its position that “the APC administration has conceded sovereignty over parts of our country to terrorists.”

“The continued silence and obvious helplessness of the Buhari Presidency on these deadly attacks on our nation’s key transportation sectors raises apprehensions of possible complicity at the very top level of the APC administration.

“It is callous and unfortunate that the APC government, in its usual insensitive nature attempted to suppress information by keeping mute over 24 hours after this horrendous attack which claimed the lives of promising Nigerians, among whom was a young medical doctor, Dr. Chinelo Megafu who was fatally shot in the ill-fated train travel,” he said.

The party said Nigerians could recall the confession by a former APC leader that these assailants are terrorists brought from neighboring countries by the APC as “political mercenaries” to rig the 2019 general elections.

“In 2021, over 10,366 Nigerians were killed by terrorists, with over 2,900 abductions in countless terrorism related attacks in which no fewer than 964 security agents were killed, as revealed by SB Morgen (SBM) Intelligence Report published in the Guardian Newspaper of Thursday, January 3, 2022.

“Again, only last week, 50 innocent Nigerians were reportedly hacked to death by terrorists in the same Kaduna State!

“This is beside the hundreds of Nigerians, including students who were abducted by terrorists with many of them still languishing in their abductors’ den,” he lamented.

“How many more Nigerians can our nation afford to lose because of the recklessness and arrogance in failure of the APC? Nigeria bleeds, families are hurting, parents mourn and agonize, yet the APC government is on vacation,” the statement said.

Previous: APC Convention: Why I pulled out of the race- Mustapha
Next: Train attack a strategy to keep southern politicians away from national politics-PDP chieftain