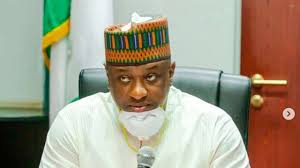 Keyamo to PDP: You can’t manage ethnic diversity, but want to rescue Nigeria

Nigeria’s Minister of State for Labour and Employment, Festus Keyamo has tongue lashed the major opposition,  the Peoples Democratic Party, PDP over the zoning of the presidential ticket.

It will be recalled that the opposition party is currently at crossroads on how to handle the issue of zoning its presidential ticket.

It should be noted that there are reports that the opposition party has thrown its presidential ticket open for all aspirants.

It was gathered that PDP governors from the South have insisted that the 2023 presidential ticket be zoned to the South as a sign of respect for fairness.

In his reaction,  Keyamo called out the PDP over its inability to manage ethnic diversity in its party.

.According to him, how can the opposition party that plans to rescue Nigeria can’t rescue themselves.

“Those who cannot rescue themselves want to rescue Nigeria.”

Previous: Why I have decided to contest for 2023 Presidency- Tunde Bakare
Next: Osinbajo may declare interest in 2023 presidential election on Monday