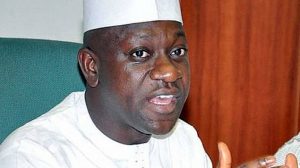 Jibril-Kofa was the core-sponsor and the main-supporter of the Yakubu Dogara’s 8th Assembly speakership aspiration that led to his emergence. Speaker Dogara appointed Jibrin-Kofa as the Chairman of the House of Representatives Committee on Appropriation.

Announcing the result on Sunday, the returning officer of Kiru/Bebeji Federal Constituency, Prof. Abdullahi Arabi said, Datti-Yako scored 48,601 against Jibril-Kofa who got 13,587 votes.

Arabi said that, “Aliyu Datti-Yako of the Peoples Democratic Party (PDP), having satisfied the requirements of the law, is hereby declared the winner and is returned elected.”

Datti-Yako, was a Commissioner of Local Government during the former Governor and now Sen. Malam Ibrahim Shakarau.

Similarly, the APC candidate for the Tudun Wada/Doguwa Federal Constituency rerun election, and former Majority leader of the House of representatives, Alhaji Alhassan Ado-Doguwa was also declared winner of the election.