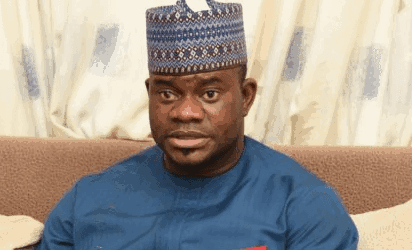 The Kogi State Governor, Yahaya Bello has reacted to reports that he was preparing to dump the All Progressives Congress, APC, ahead of the governorship election in the state.

Reports were making the rounds yesterday that some top shots in the presidency had advised Bello to dump the APC for another party, ahead of the November election in the state. This is due to his alleged misunderstandings with some top officials of the party in the state.

However, Bello’s Director-General of Media and Publicity, Kingsley Fanwo, has described the report as false.

In a statement, Fanwo said Bello’s recent declaration for second term has made his political opponents jittery.

According to Fanwo, the governor will remain in the ruling APC and fly the flag of the party during the election.

He stated that Bello’s declaration has unsettled his opponents, “many of whom had thought the party would fail and then die after the 2019 general elections in Kogi state.

“Immediately after the declaration, diaspora opposition pressed their panic button and ventured into rumor mercantile, spreading all forms of rumor.

“First, it was that the governor has not performed in office. We didn’t fight them. We only rolled out 105 verifiable achievements in 39 months of stewardship. Like the rat who saw a cat, they ran away from that sentimental infantilism.

“The new disingenuous point they now propel is to insinuate the governor was going to leave his party for a new ground. This viewpoint is not only a calorie from ignorance, but a confirmation of the confusion in the opposition camp.

“Governor Bello inherited a battered party which was depleted by those who circumvented the constitution of the party. We lost seats at the national and state assemblies to court judgements and was barred from participating in the reruns.

“He reorganized the party, gave fillip to the dynamics of inclusion and constitutionalism in the party. He provided leadership and registered over 500,000 new members in the party in an unprecedented drive.

“He supervised free, fair and credible congresses that was widely commended and also oversaw a nomination process which was a clear departure from the era of impunity.”

“We are looking beyond August. We are already working hard to win the Governorship election in November. He has built APC and he understands APC. He is the future of APC.

“Governor Bello will not leave the house he has expanded to accommodate over 500,000 new tenants to become a tenant. He is the father of Kogi APC.

“We urge all supporters and lovers of the governor and Kogi state to dismiss the weak lies of those who have been jolted by the success of the governor,” the statement added.