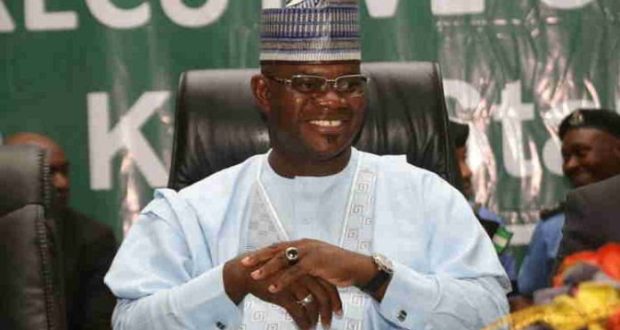 The Ohinoyi Of Ebiraland, Dr Ado Ibrahim has thrown his weight behind Governor Yahaya Bello in his second term bid, saying that he has performed very well.

Ohinoyi made the call when he led the traditional rulers from the central Senatorial district of Kogi to pay Sallah homage to the governor at his residence on Monday in Okene.

Speaking on behalf of the traditional rulers, Ibrahim commended the governor’s achievements for the past three years in his first term, stressing the need for the people to rally round him for his re-election for second term.

Ohinoyi, who also doubles as the Vice Chairman, Kogi State Traditional Council Of Chiefs, noted that the peace the state was currently enjoying today was not there during the previous administrations.

The royal father said Bello’s first term was experimental period where there might be some unavoidable mistakes, but assured the people that in his second term he would right the wrong of the first term, and build on existing success.

The monarch, therefore, appealed to the people to rally round the governor for his second term bid, stressing that he deserved to be reelected.

In his remarks, the governor commended the monarchs for the unflinching support he had been receiving from them since his assumption of office three and half years ago, and urged them for continuous support.

Bello noted that the Ohinoyi remained the father of Ebiraland and as such the father of all, commanded high respect and influence in Kogi central and the state at large.

He urged other traditional rulers in the area to rally round the paramount ruler for peace, development and progress of the area and the state in general.

The governor urged the monarchs to unite and cooperate within themselves for peace and unity to thrive in the zone and in the state at large.