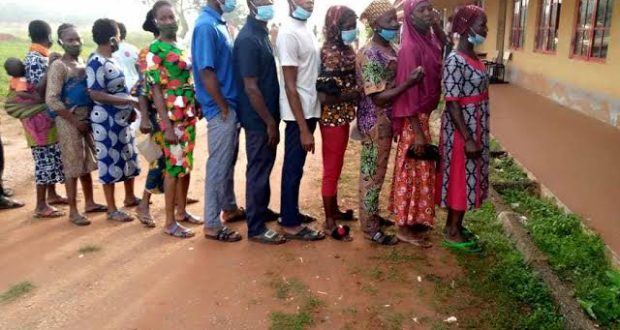 Apart from the huge crowd observed at the deputy governor’s polling unit, people appear not interested in coming out to vote.

The Nation reports that INEC ad-hoc officials have been idle because prospective voters are coming out in trickles to exercise their franchise.

For instance, at Zumratul Islamiyah Primary School, Epe, which houses two polling units, the officials were not not attending to anybody when our reporter visited the complex.

Assistant Presiding Officer II, Omolara Adeola said in her unit (PU 48, Ward 5) only 50 persons had been attended to by 11.00am when our reporter visited the complex. Five hundred and sixty-eight persons are registered at the unit.

In 2015 when this reporter covered the election in Epe the school complex was thronged by prospective voters at same time.

Ayeola said it is probably because only one position is at stake. “Otherwise, the exercise has been smooth and orderly so far, ” she added.

The story is the same at virtually all the polling units visited in town. At Polling Unit 003, Ward 5, Ajaganabe registration area, Rasheed Ganiyu, a resident of the area, an engineer, also attributed it to the single position being contested for.

Ganiyu said: “Perhaps it is because only one elective position is at stake. When it comes to general elections, people tend to show more interest, especially at this polling booth. This time around, the turnout is low.

“It may also be attributed to the EndSARS protest. People may be afraid that there may be violence. I was the first person to vote here this morning. After I voted, the officials waited for over 30 minutes without seeing any other prospective voter.”