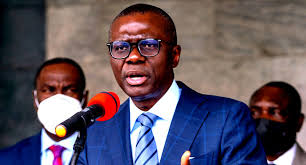 Ahead of the upcoming general elections, Lagos State Governor Babajide Sanwo-Olu and his Deputy Governor Obafemi Hamzat have officially kicked off their election campaign.

Speaking on the development, Commissioner for Information and Strategy, Gbenga Omotoso, who gave an overview of the brand campaign at a media briefing, described the campaign as a thematic continuum of what Sanwo-Olu promised in 2019.

He said: “We promised our people A Greater Lagos. What do we see around us? Abundant evidence of a new city rising from the womb of time. We do not make a false claim of having reached the zenith of our journey. Our contextual usage of the word is as an adjective which suggests an upward swing, an increase and an upward movement. These are the signs Lagosians can see all around the state.
“From the social motivational perspective, the idea of rising captures the essentialism of the spirit of thousands of ‘creative and tech rebels’ who call Lagos home, and who are changing the false narratives about Nigeria with music, movies, fashion, sports and technological innovations. They are the heroic souls putting Lagos on the global map. They are the ones helping to announce the rising of our city on distant shores. They are the Made-In-Lagos brands to whom this campaign is also dedicated.

“Mr Babajide Sanwo-Olu has himself given this dedication the finest expressions in a TV commercial and two theme songs that will be released across traditional and social media platforms in the course of this campaign. All of our campaign assets capture the place of the audacity of the Spirit of Lagos in the rising of the City. The campaign assets are not some forms of self-adulation, but fitting credit to the contributions of Lagosians, especially the youths, to the height Lagos has attained today. This campaign is not about Mr Sanwo-Olu and his team alone, it is a tribute to all our youths who are putting Lagos on the global map. This campaign is a celebration of the collective progress we have made in the last three and half years – against all odds. It is also a vivid reflection of what to expect in the coming days.”

On the choice of colours and font for the campaign, Omotoso added: “Brilliant yellow is associated with the sun. It symbolises energy, youthfulness, enthusiasm, optimism and happiness. It is called an attention-grabbing colour in branding. The brand colour of our campaign comes with a little mix of foggy orange which signifies warmth, transformation, freedom and fun, which are all the hallmarks of the Lagos we see today. These colours are representative of the atmosphere in the city today, despite the fact that Lagos as a state has gone through a furnace of fire, from COVID-19 and the #ENDSARS protest, all during the first term of this administration in office. The black symbolises power, class, prestige and luxury, it evokes a feeling of modernity, all of which you see in Lagos.

Previous: PDP Crisis: Afenifere backs position of G-5 Governors
Next: Oshiomhole to Atiku: You are a serial betrayer