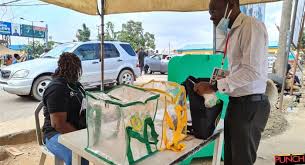 The All Progressives Congress (APC) were on the front foot Saturday night after the local government elections held in Lagos and Ogun states, with the party winning in all the 20 local government areas whose results were released by the Lagos State Independent Electoral Commission (LASIEC) at press time.

According to The Nation newspaper,  LASIEC will officially present certificates of return to the elected chairmen at the Yaba headquarters later today.

The councillorship and chairmanship elections in both Lagos and Ogun were marred by low turnout and logistic problems.

The elections were conducted in 20 local governments and 37 local council development areas in Lagos State as well as 20 councils and 236 wards of Ogun State.

There were however a few exemptions to the apathy of voters with huge turnouts in some councils, including Epe, Yaba, Ikorodu, Ibeju and Eti-Osa in Lagos State as well as Odeda Local Government and parts of Abeokuta in Ogun.

There were also problems of malfunctioning of card-readers at many polling stations.

Many of the polling units visited by The Nation went for manual checking of the voters to hasten the exercise.

Security men were up and doing across the polling units. Also, electoral officers were punctual and alive to their electoral duties.

In all the polling units visited by our correspondents, COVID-19 protocols were observed, with water for hand washing and sanitisers provided for eligible voters.