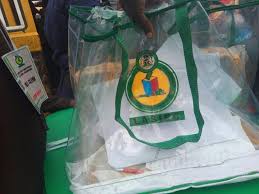 The stage is set for the Local Government and Local Council Development Area elections in Lagos as distribution of election materials has begun in Ikeja.

In a report by Punch, activities are ongoing at St. Anglican School at Ikeja, one of the venues for the elections on Saturday morning.

Officials of the Lagos State Independent Electoral Commission were on ground to distribute election materials such as ballot boxes and slips, so that the election can fully kick off.

Heavy security was also present at the venue as party agents and electoral officials coordinated themselves for the commencement of the election.

An agent for the Peoples Democratic Party, who identified himself as Mr Jerry, spoke to PUNCH Online about the process.

He said, “We are here to monitor the LASIEC officials distributing the bags and the paper, before we take off to the polling booth. That’s why I’m here.”

He also stated that the distribution is going smoothly, as elections is expected kick off soon.