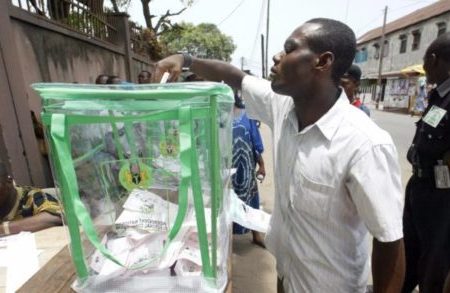 Some political party agents in the supplementary election for the Ajeromi-Ifelodun Federal Constituency, Lagos State, have lauded the voter turnout and peaceful conduct of the poll.

The agents who spoke to journalists at some of the affected polling units while the election was ongoing, expressed satisfaction with the conduct and turnout.

The supplementary election was conducted in 71 polling units across eight wards in the constituency following the inconclusive Feb. 23 House of Representatives election.

Speaking with newsmen at PU 085, Ashafa Street in Ward 5, Prince Okwara Uba, Supervisor, Peopless Democratic Party (PDP), said that the conduct of the election was excellent.

“We can say this process is an excellent one because so far, we have not seen any violence but I can tell you that the voter turnout is low,” Uba said.

Also, Mr Tunde Busari, the All Progressives Congress (APC) Supervisor in the same PU said: “The election is smooth, no issues or challenges. We are still expecting more voters to come out before the end of the exercise.

“So far, it has been a peaceful one. INEC officials were on ground at 8 a.m.,” he said.

At PU 084 in the same area, another APC agent, Mrs Risikatu Badmus, also described the election as smooth and peaceful.

“The turnout is fair in the area and there is no rancour,” she said.

Mr David Sandy, PDP agent in the same PU, who also commended the peaceful conduct of the election, however, lamented that voter cards from other areas were being used to cast votes by people from other places.

“I raised an alarm about this issue but nothing was done. We are still watching to see how everything will turnout,” he said.

At PU 002, Ward 10, Mosafejo area, Mr Adekunle Adebayo, said that the election had been peaceful and voter turnout impressive.

At PU 086, Oguntokun Street of Tolu area, a PDP agent, Mr Adejo Augustine, said, “There is no problem here, everything is going on smoothly.”

At PU 081 at Ashibejoye Street. Mrs Veronica Adegun, APC agent, also commended the conduct of the exercise saying that those who wanted to forment trouble were stopped by security agents.

But Mr Adesegun Adegboye, Accord Party Supervisor in Ward 5, complained that party agents were not allowed to check the authenticity of PVCs used by voters.

“The conduct has been going on fine, but we are not satisfied with some developments. We discovered that people from other places were allowed to vote,” Adegboye said.

Another Accord Party agent, Mr David Obiora at PU 081, said that the exercise was okay but there had been a lot of vote buying.

“I can tell you that 50 per cent to 70 per cent of voters here are not registered in the PU,” he said.